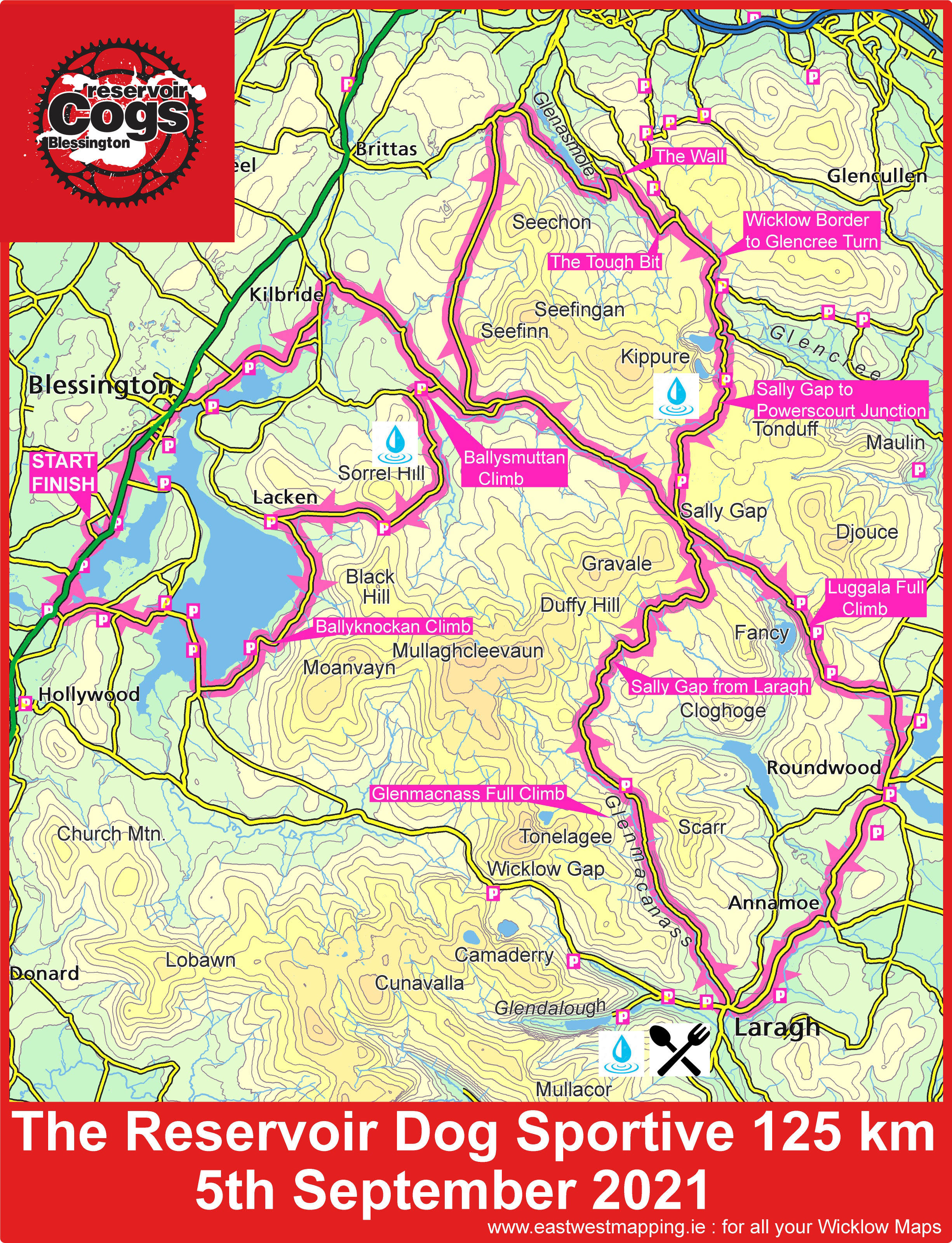 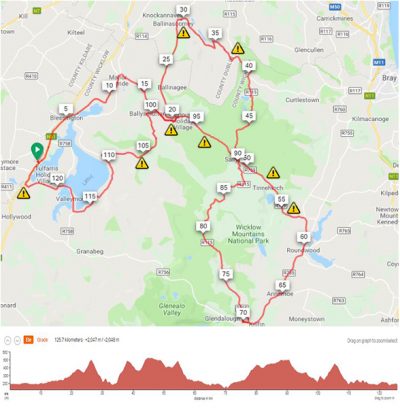 The Reservoir Dog Route leaves the from the front of Russborough House, joins the N81 and heads north for five flat kilometres as far as Blessington. From the Main Street in Blessington the route turns right onto the Kilbride Road. Don’t cross the bridge. Head straight along the mostly flat road past Three Castles to Kilbride Village at the 12 km mark then turn right onto the R759 Sallygap Road. Keep straight at the crossroads. (⚠️No Dowry climb this year!) At 20km the route takes a sharp left for the first climb of the day, the wonderfully named Scurlocks Leap climbs gently on a narrow mountain road allowing legs to adjust for the climbing to come. After a short dip straight past Kilbride Army Camp the next climb is up the shoulder of Seehan Mountain on a narrow but well surfaced road that crosses into County Dublin. Enjoy the views and the sense of remoteness despite being so close to Dublin City.   The road tops out at 490 metres above sea level. This is the highest public road in County Dublin and is at a higher elevation than the Wicklow Gap. The expanse of Dublin City sprawls below. On a good day you can see the Mourn Mountains from here. ⚠️ Keep your wits about you on the descent to the Stone Cross / Ballinascorney Road junction. The route then goes right on the R114 steep downhill towards Ballinascorney golf course for 800 metres. ⚠️  Keep your speed in check on this section as there is a hard right turn mid way down the descent. After the turn and a short rise at Allagour, the route dips into the stunning Glenasmole Valley along narrow roads with the Glenasmole Reservoirs below on the left. Over the bridge of the Dodder headwaters, the route takes you along to the end of the Glenasmole Valley. After two left turns the road swings right up the super tough Cunard to Glassamucky climb. Gear down early here to keep your legs spinning! The steepest section is lower on the climb with the gradient pitching above 20% in places. Go too deep here and you will pay for it later on! Go right along Glassamucky Road where the gradient eases briefly before the last steep pull onto the R115 Old Military Road and back into County Wicklow. The hardest climbing section on the route is now behind you!

Enjoy the descent to the head of the Glencree Valley. Straight on and it is not long before the road pitches up again this time past Lough Bray. Though steep in the middle section this is a short(ish) climb. Once at the crest there is a water stop at the Kippure Gates car park. Then it’s on over the Liffey Head Bridge and onward to Sally Gap across wide open upland. If you’re lucky you’ll get a spectacular view on the right down the wild valley of the young River Liffey. On reaching Sally Gap the route takes a left turn onto the R759. Rest the legs on this nice downhill before the next pull to Lugalla. ⚠️  On the way slow down for the narrow bridge with a tricky off-camber surface. The pull over Lugalla is thankfully brief and is the last proper climbing before the food stop. On your way up enjoy the stunning vista of Lough Tay deep in the valley on your right. Next, the steep descent towards Roundwood should be taken with caution. ⚠️ Continue straight then go right onto the L1036 at Annacarter for 2km then turn right onto the R755 towards Roundwood. Follow the main road through Roundwood Village and through Annamoe  and on to Laragh for the food and refreshment stop at the Brockagh Centre.  Resist the temptation to push too hard on this section as there is plenty of climbing to do after the food stop.

Refuelled and refreshed the route now takes you up the Glenmacnass Valley on the R115, at first on a gently rising road that will get the blood flowing in your legs after the stop. This then gives way to a steep climb alongside the beautiful waterfall on your left. There are great views to be had back down the Valley towards Laragh. Once above the waterfall the gradient eases until cresting at Druminn. The swooshing downhill through the Oasis is short lived before the climbing resumes for Sally Gap. Emerging from the trees the road snakes across the open mountain side keeping the top out of view until the very last moment. May the wind be at your back on this section! At last, Sally Gap is gained 20km after leaving Laragh. Take a left turn onto the R759 back down the Liffey Valley on a technical descent ⚠️that could catch the unwary out. The road is undulating and a final drop brings you to the left turn to cross the Ciaran Jones Bridge over the River Liffey.

Once over the bridge gear down for the coming climb. You can dream of the Alpe D’Huez as you wind your way up the switch backs early on the climb. Go left at the junction after the switchbacks. About 500m after the junction there will be a chance to refill your water bottles one last time. A twisty short descent then brings the route to the foot of the Ballynultagh Gap climb.  This section is a test for tired legs. A winding, bumpy road eventually tops out at the Ballynultagh Gap. An amazing panoramic view over looking the Mountains and Poulaphuca Reservoir will reward tired riders. A fast descent then drops down to Lacken village.  ⚠️ Watch out for wandering sheep and some loose patches of gravel on the descent. Go left to join Lake Drive. The road swoops up and down over this well worn training route through the pretty mountain villages of Lacken and Ballyknocken. Once you crest the hill at Ballyknocken you have cracked it! A right at the T Junction through Valleymount and a left on the far side of the bridge brings the route on a quiet short climb over Humphreystown. Nothing steep here! A descent to the right turn onto the N81(⚠️- Caution – busy main Road!)  then gives way to the last rise of the day. This short pull may seem to go on for ever but once on the flat road above it is only two km to the finish at Russborough and a well deserved rest. Congratulations – you have just ‘Done the Dog’!

The Reservoir Pup Route leaves from the front of Russborough House, joins the N81 and heads north for five flat kilometres as far as Blessington. From the Main Street in Blessington the route turns right onto the Kilbride Road. Don’t cross the bridge. Head straight along the mostly flat road past Three Castles to Kilbride Village at the 11 km mark. Then turn right onto the R759 Sallygap Road. At a crossroads a further 1km along, keep straight. Do not turn left. The road rises gently for the next 4km. Then take the right turn downhill to the Ciaran Jones Bridge over the River Liffey to the first climb of the day. Once over the bridge gear down for the climb over Ballysmutten. You can dream of the Alpe D’Huez as you wind your way up the switch backs early on the climb. Once over the top caution is needed on the twisty descent that brings riders to Oldcourt. Brake early for the T-Junction.⚠️

A left turn brings a flat section of road past Blessington Bridge and onto Lake Drive. The route is now on rolling roads. The road swoops up and down over this well worn training route through the pretty mountain villages of Lacken and Ballyknocken. Take a break have a bite to eat and fill your bottles at the refreshment stop in the Old Lacken school at the Y junction (31km). Continue around the lake and once you crest the hill at Ballyknocken continue for another two kilometres before taking a left turn at Annacarney. Onto the R758

Go uphill for 150 metres and then veer left off the main road. This is the start of the climb over Togher and is the most testing stretch of road on the Pup route. The road goes straight up the hill in a series of ramps for about 3.5km. The flatter sections will allow riders to catch their breath before the final steep pull to the top of the climb. Take a moment to enjoy the view of the lake behind and the Mountains guarding the Wicklow Gap road ahead. Take care on the swoopy descent on the narrow hill road past Glenbride ⚠️  before a tight right hand bend delivers you to the junction with the Wicklow Gap Road.

Go right onto the R756 road in the direction of Hollywood for the next 7km crossing the Kings River then on to the uphill drag before turning right onto the L8347 at 53km. After an initial steep pull this road dips and rises along a quiet, scenic road with spectacular views of the Reservoir and the mountains beyond to the East. After 5 km the road swings right on to a sharp downhill⚠️ . At the T-junction below go left and stay on a bumpy road for 2km. Then keep right for the descent to the right turn onto the N81 ⚠️which then gives way to the last rise of the day. This short pull up Poulaphouca may seem to go on for ever but once on the flat road above it is only two km to the finish at Russborough and then enjoy a well deserved rest and food. Congratulations – you have just ‘Done the Pup’!